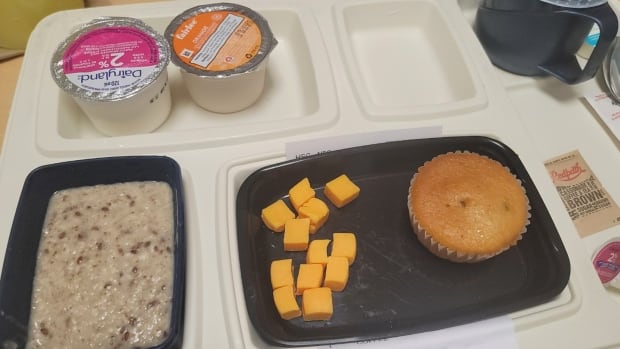 A relative of a man recently hospitalized in Winnipeg says patients are being given unappetizing meals and wonders if they are meeting the nutritional needs of people recovering from illness or injury.

Thomas Rempel-Ong’s brother-in-law broke his femur over the August long weekend and was sent to the Health Sciences Center in Winnipeg for immediate surgery.

Rempel-Ong soon began snapping photos of the unattractive meals served to her brother-in-law as he tried to recover from his surgery.

“The diplomatic response was that everything he tried to eat was completely bland, there was no flavor,” Rempel-Ong said.

“It looked unappetizing and almost as if it had been fabricated by the lowest bidder.”

What stood out in the photos was the small portion sizes, the lack of fresh fruits and vegetables and how nasty the food looked on the plate, he said.

Menus offer fruit and vegetables throughout the day, “with additional availability of fresh fruit and salad upon request,” the statement said.

Rempel-Ong reviewed the hospital’s dietary policies and found that adult patients are supposed to receive a minimum of 1,800 calories per day.

According to Shared Health, the HSC meal plan follows recommendations from clinical dietitians at the Winnipeg Regional Health Authority, based on sources such as Canada’s Food Guide and “literary evidence.”

“Based on the evidence, the expert panel recommended providing a minimum of 1,800 calories per day based on a weekly average,” the Shared Health spokesperson said.

Based on the photos Rempel-Ong saw, he wondered if that was the number of calories his brother-in-law was actually served.

“Trying to start recovering from that major injury and going on – I would say – a rudimentary diet completely out of the blue, that certainly hasn’t helped his recovery,” he said.

“I just can’t believe this is acceptable. … It almost feels like we’re putting patients on, for lack of a better term, a starvation diet.”

Rempel-Ong says his brother-in-law was released from hospital a week later, choosing to recover from surgery at his home just outside Winnipeg, where he wouldn’t have to depend on meals of the hospital.

Efforts have been made to make changes to meals in hospitals across the country, including pushing for traditional and wild foods to be included in meal plans.

The problem is that food is often not considered part of health care, “when it really is,” said Hayley Lapalme, co-executive director of Nourish Leadership.

His nonprofit is working with public and private care providers in British Columbia, Quebec and Ontario — but not any in Manitoba at this point — to create meal plans that take into account how food can be part of a holistic patient care plan.

“Unfortunately I think hospital food is notoriously unloved across the country. But I really don’t see it as an isolated or individual failing of a facility or the staff there, but it really is a systemic failure on set,” Lapalme said.

“And that’s one, I think, that goes back to a mindset really that food is incidental to the care that’s provided in a health care setting.”

Rempel-Ong says his brother-in-law was put on a low-sodium diet, to reduce the risk of inflammation after surgery, but he says that limit shouldn’t mean the food served is bland and unpalatable.

“You can still have a whole, healthy diet without salt,” he said.

To help her brother-in-law with his recovery, Rempel-Ong dropped off a care package, which included high-protein snacks, sparkling water and no-salt-added seasonings to make his hospital meals more appetizing — but he notes some patients might not be able to supplement their diet.

Nourish Leadership claims that when healthcare facilities provide more appealing and tasty food, patients are not only happier, but actually spend less time in the hospital.

“We know that a patient in a hospital who is malnourished is going to stay…two to three days longer than a well-nourished patient,” Lapalme said.

“They will cost the entire system $2,000 more for this one incident.”