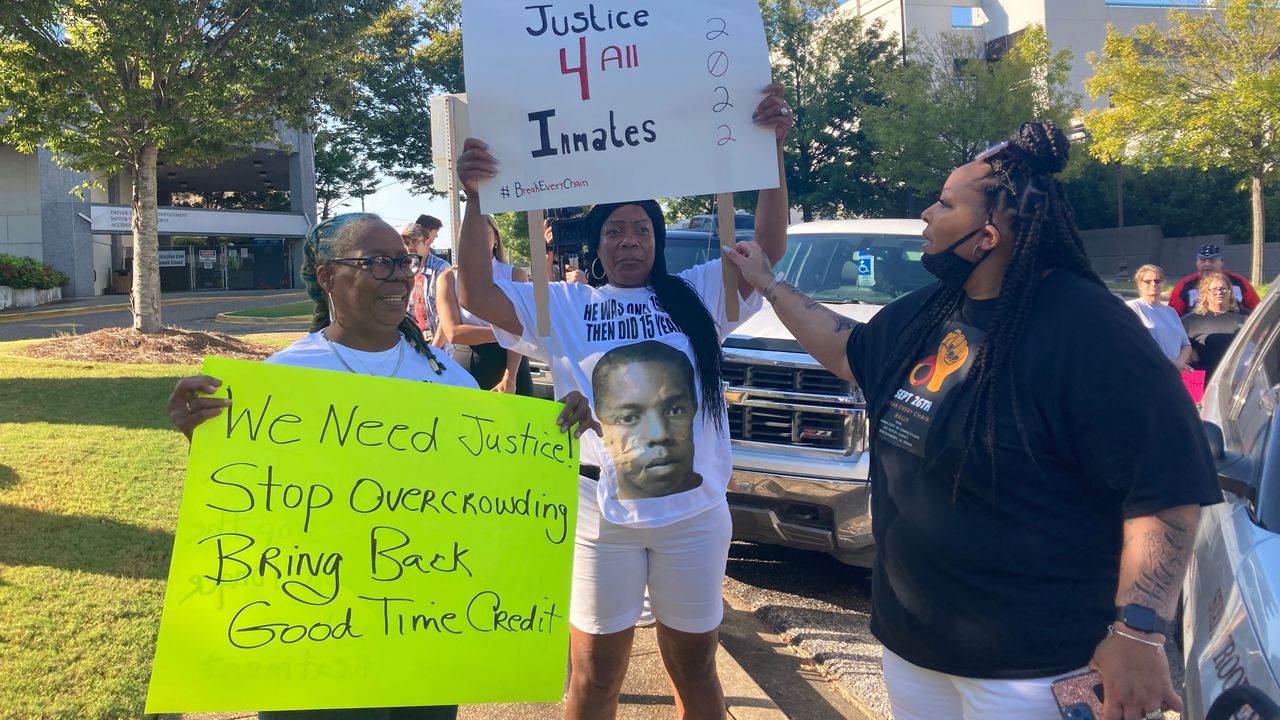 A work stoppage by inmates at Alabama prisons protesting better conditions has entered its third day and is resulting in fewer meals for inmates.

Some claimed the reduction to two meals a day was in retaliation for the strike. The Alabama Department of Corrections said that was not the case.

The strike began Monday in conjunction with a rally where organizers called for sentencing and parole reforms in Alabama’s system, which the US Justice Department says incarcerates men in violent conditions that violate the Constitution.

Relatives and friends of detainees have reported since Monday that prisons do not serve hot meals and detainees do not receive lunch.

On social media, people claiming to be inmates at ADOC’s St. Clair and Staton prisons posted photos of trays containing a scoop of peanut butter, two slices of bread and a few pieces of fruit. At another establishment, men posted pictures of trays with a single slice of cheese and a scoop of oatmeal.

“They’re trying to starve us in Staton,” one posted.

The kitchen at William C. Holman Correctional Facility mostly closed after the prison partially closed in 2020, leaving inmates at the facility to receive meals from nearby GK Fountain Correctional Facility. Many inmates there are upset that their meals are being affected by striking workers at a separate prison. Most inmates have only received peanut butter or bologna sandwiches, hot dogs or slices of bread since Monday, according to lawyers and videos posted on TikTok by people claiming to be inmates in the ADOC establishments.

The Alabama Department of Corrections, responding to questions about the strike today, said the reduction was logistical and not retaliatory. ADOC said the strike continues to varying degrees at most major state prisons. Alabama has 13 prisons for men and one for women. The ADOC said the inmates were following a “holiday schedule” that provided only two meals a day.

“All facilities remain operational,” ADOC said. “However, these work stoppages have affected food services given that inmate workers make up a large part of the facility’s support workforce. The facilities have been on a holiday meal schedule since Monday. This schedule allows two meals instead of three. This is not a retaliatory measure but a logistical necessity to ensure other essential services are provided.

ADOC also said that “controlled movements and other security measures have been deployed to maintain a secure environment. ADOC does not comment on specific security procedures due to the safety of inmates, our staff and the public.

“Some programs, including classes at Ingram State Technical College, were restricted but most were unaffected because most programs have their own staff,” ADOC said. “It is common practice in prisons across the country to use inmate workers to help provide various essential services such as catering, laundry, etc.”

Diyawn Caldwell, founder of the advocacy group Both Sides of the Wall and organizer of the strike, said it is ADOC’s responsibility to feed inmates three times a day whether or not they are on strike.

“Their regulations say they’re supposed to be fed three times a day, two being hot meals,” Caldwell said. “And due to their lack of staff, they feed them on the holiday schedule. Which shouldn’t be the burden of inmates. It is the burden of the staff because it is their responsibility to ensure that the inmates are fed.

Caldwell spoke at Monday’s rally outside the ADOC offices in Montgomery. Family members of detainees said they feared for loved ones in an environment the DOJ said was plagued with assault, sexual abuse, weapons, drugs and excessive force by officers correctional. The state acknowledged the problems, but denied DOJ claims that the conditions violate the constitution.

Speakers spoke of the declining rate of parole granted, even for inmates who are considered good candidates under the Parole Board’s own risk assessment guidelines. Today Caldwell said it was leading to a loss of hope and helping to fuel the violence.

“They have no way out,” Caldwell said. “And when you do that, it brings violence. Because they’re sitting there, everyone is annoyed, they’re restless, and their tolerance level is very low. So they need some kind of hope, some kind of incentive and some kind of window to be able to reintegrate into society. And basically it goes through the parole board. And we need relief there.

Officials who defend the parole system say the rate has fallen in part because violent offenders make up a higher proportion of the prison population than before changes to sentencing laws in the last decade.

Caldwell said advocates of reform and safer prisons are not asking for the release of dangerous offenders.

“We don’t want the floodgates open,” Caldwell said. “We understand that there are people who need to be in prison. We understand that people have to make time for the crimes they have committed. However, we ask inmates to be given a fair chance.

Former inmate Eric Buchannon of Birmingham, who also spoke at Monday’s rally, said he hoped the strike would draw attention to conditions conducive to violence.

“Drug overdoses that happen in prisons, we have to see that change,” Buchannon said. “Fentanyl is in prisons. The heroine is in there. None of this contributes to the rehabilitation of anyone. It’s like survival in there now. And so we want to see the conditions change.

The legislature and governor have approved a plan to build two 4,000-bed men’s prisons that will replace some of the existing facilities. Officials say they will be safer for inmates and staff and better able to provide rehabilitation programs and medical care. Prisons should be ready for occupancy in 2026.

Are chef-to-table meal services the future of cheffing? No restaurant? No problem.…