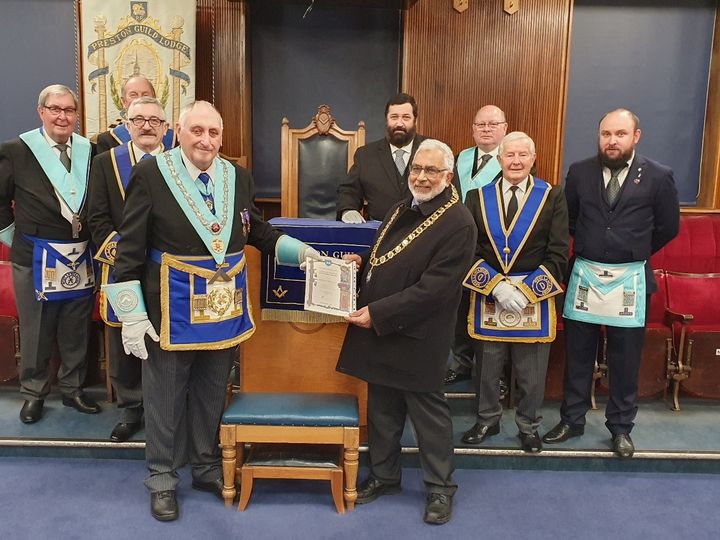 The Mayor of Preston presented an award to local Masons after members donated £ 5,500 in cash and groceries to local food banks.


Preston Guild Lodge said they were “humbled and honored” by the visit to Preston Masonic Hall, where Mayor Javed Iqbal presented the lodge with a coronavirus pandemic hero award certificate.

Over the past year, the lodge has provided financial and food contributions to the food banks of 14 local organizations in Preston, with the award recognizing individuals and groups who have supported the community during the pandemic.

Lodge Master Ian Greenwood said: “By focusing on our local Preston charities, we hope we have helped them through some of the impacts of Covid-19 and the effect of the lockdowns.”

Preston Guild Lodge has said he has always supported the local community and acknowledged that the impact of Covid-19 is damaging many local charities as their fundraising is severely disrupted.

Members of the lodge served as Covid Responder volunteers, supporting vulnerable people confined to their homes and working to deploy the vaccine.

The visit coincided with the lodge officers training to welcome a new member in January, so it became a dress rehearsal.

This sparked the curiosity of Councilor Iqbal, who took an interest in the Pavilion Room and its connection to Preston’s Guild.

The lodge was founded in 1922 and named to commemorate the guild merchant that year.

Next year is Preston Guild Lodge’s centenary, and he noted that the 19th century Town and Guild Hall was at the heart of the banner.

He was surprised to learn that the building’s first stone had been ceremonially laid in 1862 by more than 300 Freemasons under the direction of then-mayor Robert Townley Parker, himself a Freemason.

Read more: Festive parade in the streets of Cottam this Sunday

Councilor Iqbal was unaware of the Masonic connection and was impressed to find that five of his predecessors were members of the Preston Guild Lodge.

The importance of the Stone Jewel Hall honoring the dead of the Great War, awarded to the lodge in 1925, was also explained.

Before leaving, the Mayor took a tour of Preston Masonic Hall, used for private functions, and was impressed with the size and facilities.

He recently attended a reception hosted in the room by the Royal Navy, and by chance he bumped into Resident Chef Alistair and thanked him for a great meal.

Members said the training meeting was anti-climate after the visit.

Read more: See the latest news and headlines from Preston