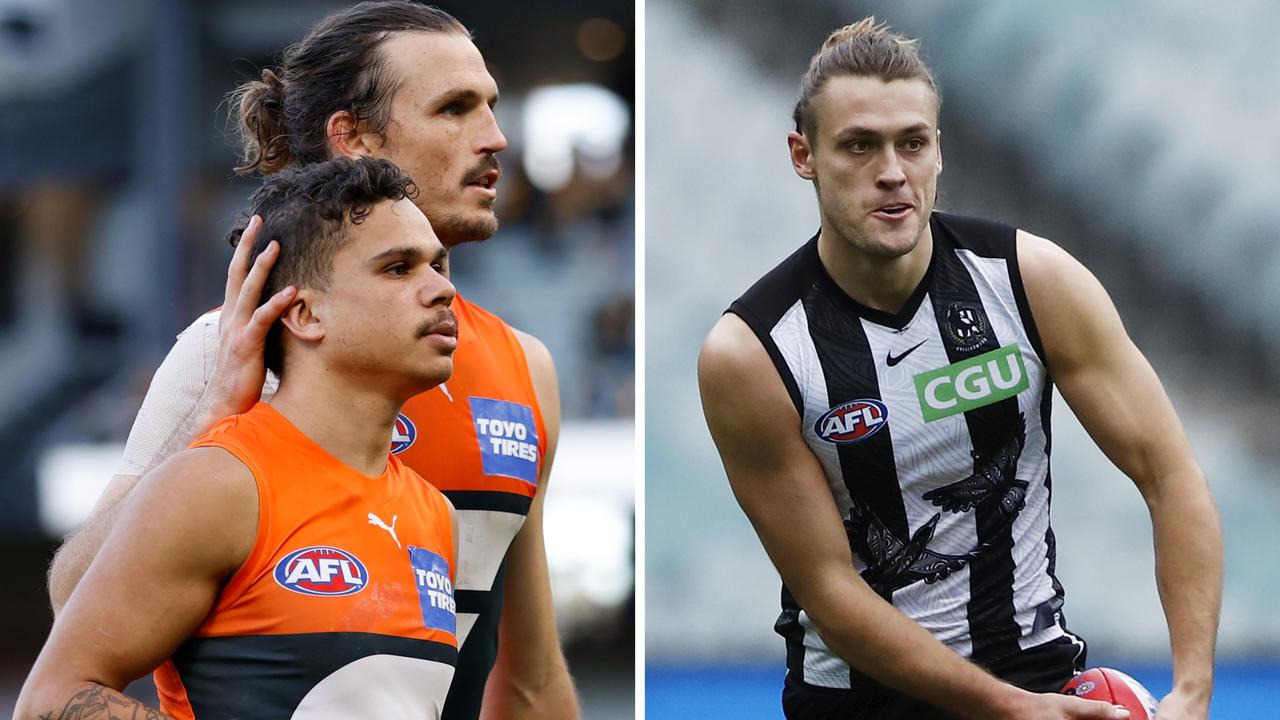 
There are two days left in the AFL trade window and some of the bigger dominoes have yet to fall.

And after haggling for weeks over Jye Caldwell’s worth last year, the Bombers and Giants could start over on Bobby Hill.

Follow the AFL business news from Tuesday, October 12 in our blog below, and scroll down and ask your questions in our live business chat from 9 a.m. to 5 p.m.!

For the latest AFL trading and free agency news, watch Trading Day every weekday of the trading period starting at 5:00 p.m. EDT on Foxtel and Kayo. New to Kayo? Try 14 days for free>

Adelaide will not budge on her Sydney offer for Jordan Dawson.

As reported by foxfooty.com.au, the Crows kicked off Melbourne’s future first round in a direct proposition for Dawson.

The Swans would like something else – probably Adelaide’s Pick 33 – but the Crows remain strong.

Adelaide’s pick 4 and their upcoming first round are categorically ruled out after Sydney rejected pick 17 – which would have come from the Western Bulldogs – last week.

The Crows have the threat of bringing in Dawson via the preseason draft, although it is understood their preference is to deal in good faith and orchestrate a trade.

To borrow a line from Dwayne Russell, be prepared for a midday craze.

AFL clubs will be able to strike deals earlier than the final cut-off days on Wednesday to avoid a ridiculously manic end to the 2021 trade period.

The AFL has confirmed that clubs can officially enter trades through the online trading system and the ARC from noon (AEDT) on Wednesday until the 7:30 p.m. deadline.

This means that clubs will have three extra hours this year to transact after receiving a smaller window from 3 p.m. to 7:30 p.m. to complete the 2019 and 2020 trading periods.

While the league is keen to see several deals come to an end on an exciting final day, the extra time will allow clubs to breathe a bit to negotiate and close deals.

The most notable deals this year that will likely be done include Jordan Dawson in Adelaide, Jordan Clark in Fremantle and Peter Ladhams in Sydney.

It was a similar scenario in 2019, with Alex Keath (Western Bulldogs), Tom Cutler (Essendon), Zak Jones (St Kilda), Dan Butler (St Kilda), Josh Jenkins (Geelong), Aiden Bonar (North Melbourne) and James Aish (Fremantle) made everything sweat until the last hour, when no deals were made for Joe Daniher, Tom Papley and Jack Martin.

David Trotter, manager of West Coast great Jarrod Brander, said his client is still hoping he finds a home during this year’s commercial period, but would consider changing clubs as a deregistered free agent .

Despite his talent, Brander is away from the Eagles, having played on a wing for much of his career despite being 195cm, given the club’s large stocks at both ends of the pitch.

Trotter confirmed Carlton was interested in making a move for Brander, but that evaporated when they struck a deal for Lewis Young of the West Bulldogs.

“I hope something will happen during this time; I’ve had a few clubs that said they were watching a bit, but it’s getting pretty late, ”Trotter said AFL Commercial Radio.

“Carlton showed real interest, but with (Lewis) Young going; I think it would have been a good chance (if he hadn’t). If he goes by tomorrow night and nothing happens, talking to the West Coast, they’ve been pretty good in that they have real depth in the key position area. He’s played a lot on the wing over the past two or three years, which traditionally the 6’3 ”, 6’4” winger hasn’t done much over the years.

“If there was an opportunity out there where someone is going through a period of trading, has a spot on their list that they think Jarrod might be able to fill, then we’ll go to the west coast and j ‘hopes they will do the right thing and he could become a deregistered free agent.

Brander was the West Coast’s first selection in the 2017 draft. Selected 13th pick, he was one of their highest picks in the decade draft, behind Dom Sheed and Liam Duggan (both 11th pick) .

He has played 22 games in his career, including a high of 11 last season, scoring his first five career goals.

Collingwood have been one of the most active clubs in this commercial period, acquiring Nathan Kreuger, Patrick Lipinski and the necessary draft points to match an early offer on father-son prodigy Nick Daicos.

Meanwhile, in the background, three of the Magpies’ biggest stars are set to enter free agency in 12 months – Darcy Moore, Jordan De Goey and Brayden Maynard – otherwise known as’ pre-agents’.

Speaking on the 3AW Sports day, Collingwood football boss Graham Wright said the club will look to step up contract negotiations with the trio after the swap period ends on Wednesday night.

“We would definitely like these guys to be attached, I’ve had conversations with all of their managers,” he said.

“We will move them forward once we get through the next few days (of the trading period) and hopefully start locking them up for the long term at Collingwood Football Club.”

Giants football boss Jason McCartney said he told Bobby Hill it was “highly unlikely” that a trade for him would be completed before Wednesday night’s deadline.

Hill, who is under contract with the Giants for another season, is keen to be traded to Essendon.

But the Giants don’t want to lose Hill, who has also sparked interest from Collingwood.

McCartney said if a trade doesn’t take place Hill will be greeted warmly by the Giants.

“Bobby and I spoke and I said that it is highly unlikely to happen and that he would be welcome at the club without any issues or concerns,” he said. McCartney said AFL Media.

Essendon has not officially recommended a Giants trade involving Hill, but the two clubs are expected to discuss the situation on Tuesday.

SEN reported Collingwood has “a significant interest” in Bobby Hill and had offered him a multi-year contract.

8:30 am – STANDOFF CATS AND DOCKERS FOR CLARK

Geelong and Fremantle remain stuck in a commercial stalemate for Jordan Clark.

AFL Media reports the Cats are determined to want either the Dockers’ pick 19 or the 22 pick and a future Carlton-related third round pick.

But Fremantle, having already improved his Pick 27 offer, believes the 22 selection is enough on its own in a trade for the 20-year-old, who wants to return to his home state of Western Australia.

The Dockers’ upcoming third round is one of the club’s only two picks in next year’s draft besides its first round.

While it is possible that Clark will be retained until the final year of his contract, one club is expected to give way to facilitate the transfer.

Essendon believes Bobby Hill’s business value is a late choice in round two or early in round three.

The manager of the Donation list, Adrian Dodoro, was awaiting further information Monday evening from his counterpart Jason McCartney, who was assessing Hill’s market value.

Foxfooty.com.au understands that Essendon would be happy to hand over choices 51 and 56.

Another option is for the Bombers to part ways with their future second-round selection, which, if things go as planned, will be a 1930s pick in 2022.

GWS doesn’t want to lose Hill and would consider dealing with another Victorian club if negotiations with the Bombers fail.

Despite a heavy haggling over Jye Caldwell in 2020, McCartney and Dodoro shared friendly conversations on Sunday and Monday.

Hawthorn and North Melbourne have informed the Giants they are not interested in Hill, who called Leon Cameron directly to request a trade at the weekend, with a year remaining on his contract.

On Monday night, multiple outlets reported that Collingwood had also signaled interest in acquiring Hill if the Giants could not strike a deal with Essendon and would still be open to trading him. But the forward remains keen to join the Bombers and hopes a deal can be reached.

His manager Andrew McDougall also had productive conversations with GWS and Essendon this weekend and Monday.

But Hill and his management have come to the Bombers, who would be happy to trade for him to fill a need, but won’t hand over more than they think they’re worth, which is around 35 at most.

Ask your business questions from 9 a.m. to 5 p.m. in our live chat below. If you can’t see the chat, tap here.