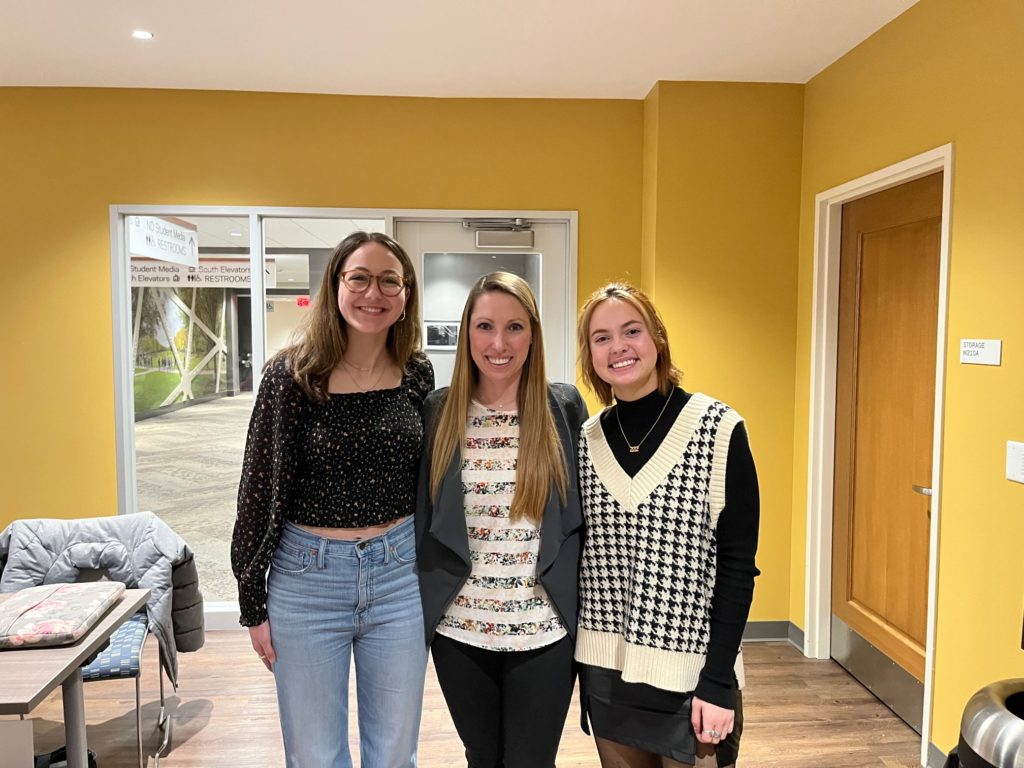 Editor’s note: This story includes mention of eating disorders and self-harm. A list of resources is available on the National Eating Disorder Association website or through their helpline.

“What is eating culture, why are eating disorders so dangerous, and what qualifies as an eating disorder?” said Mollie McKone, sophomore and president of Notre Dame EDAC.

EDAC was founded and endorsed in September 2021 at Saint Mary’s by junior Julia O’Grady. Although Saint Mary’s and Notre Dame chapters each focus on their respective campuses, the two collaborate extensively on club events.

O’Grady outlined the club’s mission by explaining its three goals.

Leaders said they hope to make an impact on campus through club events and advocacy for policy change. As one of their first events, club leaders plan to observe National Eating Disorder Awareness Week next week, February 21-27.

The week will consist of events to raise awareness of campus resources, guest speaker talks, a candlelight vigil, and a dedicated Sunday mass on February 27.

“We’re going to ask people to light candles for people [who] are struggling or people who have lost their lives to an eating disorder,” McKone said, explaining the prayer vigil.

“I remember sitting in my health class saying, ‘This would never happen to me,'” she said.

But he did. Obringer and McKone said they both came to college after recovering from eating disorders and faced additional challenges living on a college campus.

“What Molly and I work really hard to do is educate about how students are more at risk because it’s such a time of change, because there’s more stress and pressure” , Obringer said.

The club’s goals are a hit for its leaders.

“As both people were recovering from eating disorders, we were a bit worried about the limited resources there. [were]”McKone said.

Obringer said students face barriers getting the help they need for eating disorders.

“We know that if a student tries to ask for help and they don’t know where to go, it’s not very productive,” Obringer said.

“One of the comments from our SAO person was that they thought our club was too specialized,” Obringer said. “But food is a relationship that everyone has, whether positive or negative.”

Besides outreach and education, Obringer said the club hopes to work with Campus Dining and RecSports on policy changes.

“So working with RecSports to educate about disordered exercise habits, as well as working with [Notre Dame Campus] Dinner to make meal plans more established, especially with regards to people with disabilities and dietary restrictions,” she said.