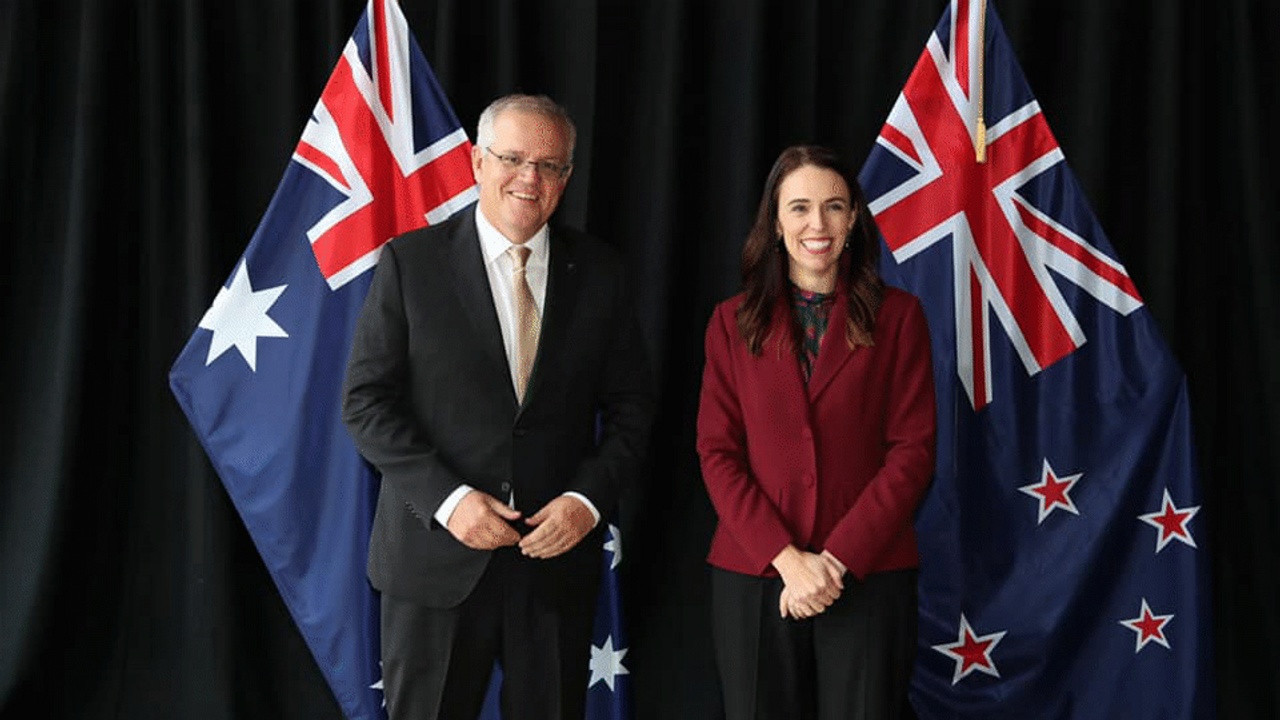 The Labor Party-Greens coalition government in New Zealand has cautiously welcomed the AUKUS military pact announced on September 16 by US President Joe Biden and the Australian and UK prime ministers.

The deal includes provisions to help Australia acquire nuclear-powered submarines and for a greater US military presence in Australia. This represents a major step towards what would be a catastrophic US-led war on China, which would drag out all other countries.

Australia’s transformation into a giant base for US military operations makes it a target of retaliation from China, with implications for the entire region. New Zealand, as Australia’s ally and a member of the US-led Five Eyes intelligence network, would be immediately involved in any conflict.

The US ruling elite sees China as the main obstacle to its global hegemony. Under Presidents Obama, Trump, and now Biden, the US military presence in the Indo-Pacific region has grown significantly and Washington has imposed trade war measures and economic sanctions against China.

New Zealand Prime Minister Jacinda Ardern was only told about AUKUS the day before its announcement. New Zealand and Canada have not been included in months of talks on the pact, although the two countries are part of the Five Eyes along with the United States, Australia and the United Kingdom.

Ardern told the media that she was “happy to see” the United States and the United Kingdom showing greater interest in “our region … because of course it is a contested region”. She said she would not have expected to be included in AUKUS because “the anchor of this arrangement [is] nuclear powered submarines … [which] could not enter our waters.

In 1984, the Labor Party government of David Lange banned nuclear-powered or nuclear-weapon ships from visiting New Zealand. The anti-nuclear policy was a way for the Lange government to present itself as anti-war and to distract from its right-wing attack on the living standard of the working class. This caused a public break with the United States, but behind the scenes, Lange dramatically escalated New Zealand’s involvement in the Five Eyes, building the Waihopai spy base to appease Washington.

Since World War II, New Zealand’s ruling class has relied on the United States to support its own neocolonial rule over the Southwest Pacific, where China is currently increasing its economic and diplomatic influence. Successive governments have joined the wars waged by the United States in Korea, Vietnam, Afghanistan and Iraq.

After three decades of wars led by the United States, the outbreak of a third world war, which would be fought with nuclear weapons, is an imminent and concrete danger.

When asked if she was concerned that AUKUS would escalate tensions with China, Ardern did not respond directly. She said: â€œWe have worked hard, as Australia has done, to ensure greater UK and US engagement in our regionâ€¦ we want peace, we want stability and we want a rules-based order that is preserved.

The defense of the “rules-based international order” is the pretext given by the United States for its militarization of the Indo-Pacific, including provocative naval exercises near the territory claimed by China in the South China Sea .

Ardern stressed that New Zealand is making “an extraordinary investment” in the Defense Force, in order to play its role in the region. The Labor-led government is currently spending $ 20 billion on modernizing the Air Force and Navy, as well as expanding the military. Hundreds of millions have also been paid to the Government Communications Security Bureau (GCSB), which conducts electronic surveillance around the world, including against China, and shares it with the United States.

Ardern’s Labor Party initially formed a coalition government in 2017 with the xenophobic and anti-Chinese New Zealand First Party and the Greens. The Ardern government was greeted by the U.S. Embassy, â€‹â€‹which made it clear that the Trump administration was not satisfied with the previous National Party government’s support for a closer economic relationship with China.

In 2018, the government issued a strategic defense policy statement which, for the first time, identified Russia and China as the main â€œthreatsâ€ to global stability. This was combined with a reorientation of New Zealand’s military and diplomatic resources to counter China, known as the “Pacific reset,” which was hailed by the United States.

In the 2020 election, two Chinese-New Zealand MPs, Raymond Huo of the Labor Party and Jian Yang of National, resigned after being denounced in the media and by pro-American academics, without any evidence, as “agents” of the Chinese Communist Party.

Despite the strengthening of military and intelligence ties with the United States, the Ardern government remains reluctant to align itself explicitly and resolutely with China, which receives about a third of New Zealand’s exports. This dependence has only increased amid the global economic turmoil triggered by the COVID-19 pandemic.

However, as the United States intensifies its confrontation with China, the balance of the Ardern government becomes increasingly precarious and divisions deepen within New Zealand’s ruling elite.

A New Zealand Herald The editorial criticized UKUS, saying it was contributing to “continuing tensions which could escalate into conflict”. He said the Australian government had “completely rejected its fate with the United States, despite America’s decline over the past two decades as an international political and moral leader with its wars, its struggling democracy and its doubts about its reliability as an ally â€.

On the other hand, sections of the political establishment have expressed disappointment at New Zealand’s failure to include in the deal. New Zealand’s first leader Winston Peters, who served as Deputy Prime Minister from 2017 to 2020, told TVNZ that AUKUS was needed to “defend freedom and liberty” in the Indo-Pacific against the China. He called on New Zealand to spend “a lot more” on its own army.

The National Opposition Party appears to be moving towards greater alignment with the United States, having been seriously destabilized by the anti-China campaign of the media and the political establishment. National leader Judith Collins, the party’s fourth leader since 2017, said it was “disappointing” that the government did not participate in the UKUS talks. “This raises serious concerns about the interoperability of New Zealand Defense Force systems with our traditional allies in the future.”

Despite the militaristic record of all parties in parliament and Ardern’s statement hailing AUKUS, the pseudo-left Labor supporters are promoting the illusion that the government will stay out of escalating war preparations. Write about the unions supported Daily blogcolumnist Chris Trotter said the government “would gladly stay so far from this madness [AUKUS] as possible.

Blog editor Martyn Bradbury called for “an independent foreign policy to navigate between America and China”, both of which were “empires violating human rights.” Bradbury added, however, that he was in favor of “a much bigger army” and that New Zealand’s military spending is expected to rise from 1.1% to 3% of gross domestic product.

He said this was necessary “to defend all of our territory,” including New Zealand’s vast Exclusive Economic Zone – an ocean area roughly 15 times the size of New Zealand – as well as the semi- the country’s Pacific colonies, Tokelau, the Cook Islands and Niue, and the Ross Dependency in Antarctica, claimed by New Zealand.

Despite his anti-American demagoguery, the Daily blog repeatedly echoed US anti-China propaganda, including the lie that the coronavirus pandemic originated from the Wuhan Institute of Virology. The blog also describes China as a threat to both New Zealand and the Pacific region.

No one should be fooled by Bradbury’s assertion that he wants a purely “defensive” army “independent” from the American alliance. The blog represents a layer of the upper middle class that has embraced New Zealand imperialism in the Pacific; and the maintenance of these neocolonial interests depends on the support of the United States and Australia.

UB limits dining options due to staffing and supply shortage