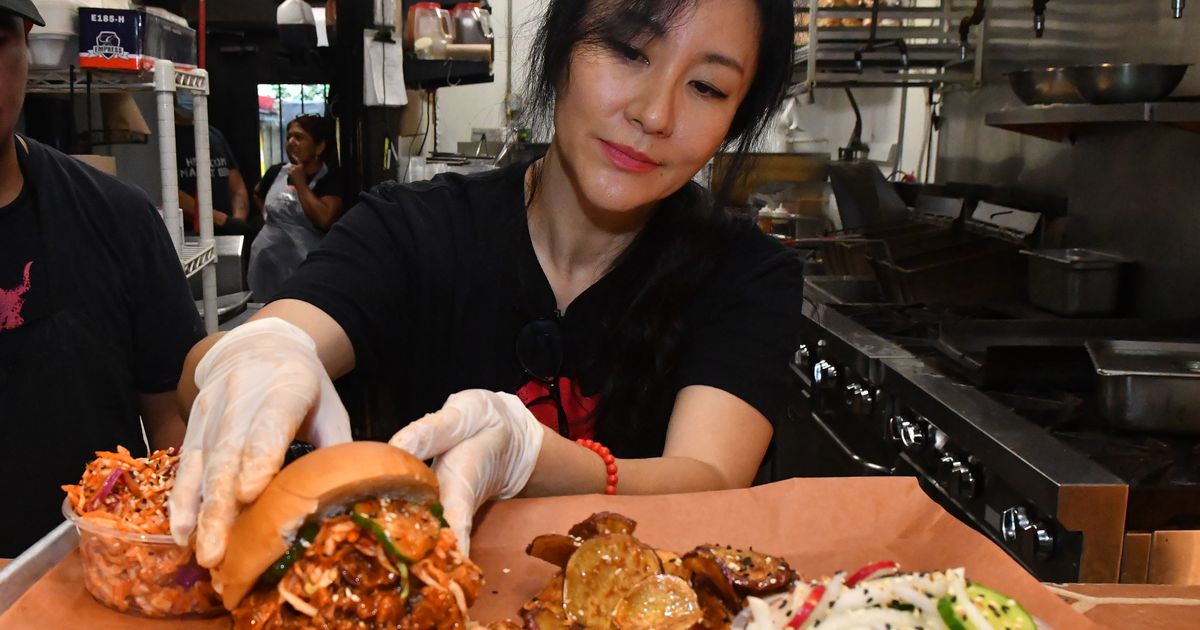 The deprivation Lee experienced in 2006 was not new. She had already experienced the worst of poverty, sharing a one-room basement apartment with her family of six.

She had also known fame and glamour, first as a model and then as a teenage K-Pop starlet who recorded four albums and toured Asia. She had known the adventure, fleeing to America with a man she barely had knew against his parents’ wishes.

Almost two decades later, she was a 36-year-old novice cook and a newbie divorcee. But every time she picked up a chef’s knife, her memories took her back to when it was just her and her grandmother.. And she felt something she hadn’t felt in a very, very long time: Happy.

“She cooked so well,” Lee said, remembering her Harmoni’s delicate noodles cut with a knife, thin ribbons as uniform as those of a packet. “Even when we were in a very difficult situation, she didn’t want the food to look messy.

“She was the most influential person in my life – as a chef, as a woman, as a human being,” she says. “I feel like I got so much DNA from her. She built my palace.

When Lee was 5 years old, his parents left their country home near the city of Daegu in southern Korea to seek an opportunity in Seoul. One by one, they sent for the children, four, three, two, until only Jiyeon – “the toughest one” – was left with her grandmother, Gi Hyun Kim, to take care of. from her.

As a child, Lee sat next to her grandmother in the kitchen and tore off the tails of bean sprouts. She learned how to soak potatoes in water to loosen the skin, then peel them with a spoon to keep them round and avoid waste. Just because they were poor didn’t mean their meal had to be prepared with less care.

Frugality has determined everything in the kitchen. After harvest meKorean radishes, Kim hung the leaves to dry, then braised them with soybean paste in a stew called ugojitang. One night they were eating sun-dried croasse soup for dinner. The following night, Kim slowly anneals the head and bones in a milky, gelatinous, fishy, ​​salty sauce to pour over the rice. “It’s something I would never recommend anyone eat,” Lee says. “But for me, it’s a very nostalgic memory.”

When Lee was 10, her parents sent for her and she went to live in a hilly neighborhood in Seoul where her mother shopped at small shops that sold rice, chili powder and ground cereals on place for her husband’s matinee. Misugaru — a hot drink like a cup of tea and a bowl of cereal rolled into one.

The family apartment “was like the one in (Korean film) ‘Parasite’ but smaller,” she said. The Lees shared an outdoor bathroom with three other families.

By the time Lee entered high school, she could cook simple kimchi stew or soybean stew dinners for her family.

In high school, Lee caught the eye of a scout for a teen magazine. She had an unusual beauty – mature, she was told, her gaze too unwavering, her eyes too knowing for a teenager. But the modeling agencies started calling. Then came a record producer who asked her if she liked to sing and discovered her clear, melodious voice. He signed her to a contract that paid a fraction of what he should have but enough to pay for his sister’s school fees.

Lee released his debut album and broke out in 1988, just as the world turned its attention to South Korea for the Summer Olympics. “I sort of became Cinderella overnight. Everyone wanted me on their shows. She was on the BBC, NHK, the Australian Broadcasting Corporation. She traveled to Japan a few times, which seemed like a paradise. .

He aged quickly. She played night concerts all over Korea, falling asleep in the cars that drove her around, and waking up early the next day to take the bus to school. She was unhappy.

“I had a big depression at the time,” she recalls. “I was too young to handle celebrity gossip. The producer was making so much money off me. I was working day and night and I was down to 85 pounds. I felt like I wanted to die when I get up in the morning.

When she was 18, Lee left school and stopped singing. She wanted to escape and found her way: a gentle, loving elderly man who wooed her and took her to Atlanta.

When Lee talks about her first 15 years in Atlanta, she condenses the narrative. She and her husband bought a Buckhead cafeteria – the Blue Chip Cafe in the financial center of Atlanta – then, in the early 2000s, they opened Zuma, a sushi bar, in Poncey-Highland. When that venture failed, they declared bankruptcy and Lee, finding her husband increasingly controlling and possessive, wanted out of the marriage.

With what little money she could earn, she enrolled in Le Cordon Bleu cooking school and soon began working at the Repast restaurant in Midtown. “I realized I was in love with cooking,” she says. “Since I stopped singing, I missed the stage so much that I felt sick. But cooking filled that, the artistic part of my passion. It was something magical.”

At Repast, she caught the eye of Cody Taylor, a Texas-born line cook. She wasn’t looking for a relationship, especially not with a much younger man. “I wanted to explore my abilities. I never had the chance to spread my wings,” she recalled of the time. But soon they were living together, first as friends, then something more.

She took him home to Korea, where he experienced doing gochujang, the ubiquitous Korean spice paste. “Reminds me of the barbecue rub in Texas,” he casually remarked.

ExploreMetro Atlanta Sushi Chef on the hunt for the perfect bite

This combination of Korean gochujang and beef brisket was the idea behind Heirloom Market BBQ, the restaurant they opened in 2010 with little means thanks to a cash donation from Lee’s brother and a kind owner who valued their conduct over their dismal credit history. The space, in a strip mall in a snap and you’ll miss it against the perimeter, was once a Mexican restaurant.

At the time, Lee was working at the St. Regis Hotel in Buckhead and dreaming of moving to a property in Japan. The gochujang-the chest rub was all Cody, who she loved but wasn’t going to let get in her way.

But without money to help him, he was perpetually in the weeds and called him at all hours to come and help him. “Make green cabbage!” he begged, handing her a crate of leafy greens. Lee, who had never cooked cabbage, thought of its warm, earthy smell. harmonic cooking radish leaves in doenjang, The Korean version of miso. So she used that, plus rice vinegar, Korean chili flakes, and pork fat. Cody loved it. Customers – black, white, Asian – loved it.

“Every time I ate it, it reminded me of my grandmother,” she says.

Likewise, the restaurant’s signature Korean pork sandwich was born out of necessity. A crate of cabbage, left on the doorstep during a snowstorm, froze. Taylor and Lee were always barely scraped and didn’t have the money to replace it. So she did what any frugal Korean would do with suboptimal vegetables: she made kimchi – kimchi salad. But what to do with it?

Lee scooped up all the rib filling, diced it small, fried it, then braised it in tender submission with gochujang and sweet chili sauce. She put the meat on a hamburger bun and topped it with kimchi salad. It was a special day and a mention in the AJC drew customers from all over town.

In a few months, Lee quit her job to work full-time at the Heirloom Market, where customers lined up every day, meandering through the parking lot of the small mall. The few tables they had went quickly so diners were hounded. Taylor and Lee needed enough money to build a patio. She woke up every morning with swollen hands from the night before and prayed to God that she could have another day.

Slowly, surely, they stopped living hand to mouth. Over the next few years, they installed a meat cooler, a smokehouse, a rest room, a patio. Today, 21 people work for them.

This was where all of Lee’s life and all of her experiences had taken her. Spreading your wings didn’t mean going to Japan for adventure. It meant putting down roots as a strong woman, as a business leader and as a performative creator who has something to say: it’s in the food.

“We never sought to do fusion or hybrid cuisine,” she says. “It’s Cody and Jiyeon’s soul food. As a first-generation American and a settler, I put my soul into the ground, in this country. Many settlers brought their soul food into the countries to create American food. It’s the same thing, just a different time.

John Kessler was a food writer and food critic for The Atlanta Journal-Constitution from 1997 to 2015. He now lives in Chicago.

Sign up for the AJC Food and Dining newsletter

Additional working sessions on the markup of online courses planned