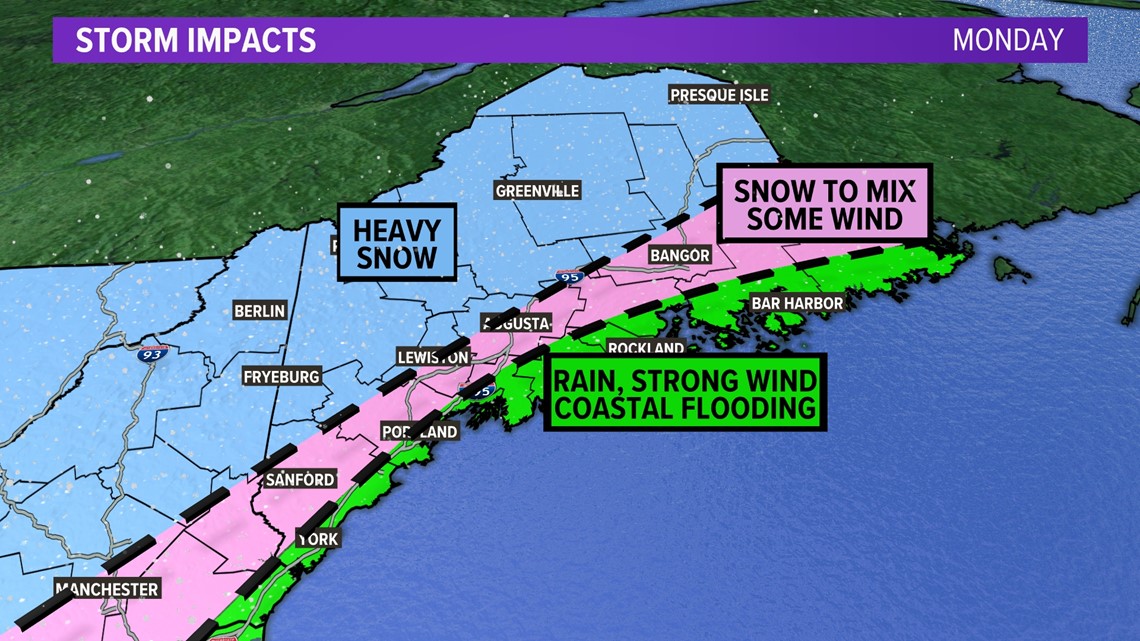 A severe winter storm brings snow, wind and rain to Maine on Monday

MAINE, USA – A few days ago I spoke about the possibility of an inland storm track on Monday.

It’s a much more complicated storm path, as there’s a rain/snow line involved and a big threat of wind.

As much as I wish it was a classic northeast with all snow and only northeast wind, it just isn’t.

That means Impacts are a mixed bag for Monday, depending on where you are in the state.

Below I will outline the timing, impacts, forecast snow totals and forecast wind gusts. Coastal flooding is also becoming an issue with this storm, but luckily the window on that will be short.

If nothing else, take this card. There are a lot of high-impact things happening here.

The coastline will likely end up with the biggest problems, but central Maine also needs to be on alert for outages and some downed branches.

Fortunately, it should be good snow in the mountains. Let’s build this base so we can ski until April!

Here’s an idea of ​​the timing of Monday’s storm.

Shortly after midnight snow will begin in western Maine.

Areas along the coast will be start as snow, but there could be a change to rain even before sunrise, given the east wind.

Snowfall rates could reach 1 to 3 inches per hour, which will quickly sweep snow onto the roads and make travel very difficult.

Whiteout conditions are possible on US 302, the Maine Turnpike, coastal US 1, and US 2 during the morning commute on Monday.

Snow also begins in Bangor around this time.

Also watch for strong gusts of wind along the coast west of Wiscasset during this time. I will detail the wind threat below.

The rain/snow line continues to push inland. By noon, areas along and north of Highway 2, as well as Bangor, will change to sleet and possibly rain.

Something to note: Since the heaviest snow falls at the start of this storm, these regions will likely have already reached their predicted totals before the rain begins.

Travel continues to be complicated. Gusty winds pick up along the Midcoast and Downeast.

Just three hours later, the rainfall will have ended for most of western, southern and central Maine.

Downeast areas will face strong gusts of wind at this point. The rain/snow line will also be well north of Bangor, with some sleet in between.

As was the case in western areas, most of the forecast snow will have already fallen by then.

Most will see the rainfall end entirely from this storm around 7 p.m. A few lingering showers are possible as colder air enters, but most of the storm will be over.

Tuesday will be colder and quite windy. Watch for frozen spots on Tuesday morning, especially on back roads.

There are two big impacts on the coast with this one: wind gusts and potential coastal flooding.

Wind gusts will be very strong from the east and southeast. This is one of the most impressive wind signals I have seen since I started my tenure here at NCM.

I keep a close eye on the west side of Penobscot Bay. I wouldn’t be shocked to see here a few gusts reaching 105 km/h, maybe even a little more.

Places just inland from the coast will also be windy, but the possibility of gusts over 50 mph is rapidly diminishing. The higher peaks can also see a few stronger bursts mixed in, leading to isolated power issues.

When talking about winds of this magnitude, we expect power outages not to be too far behind.

The highest risk will be along the coastline, where the strongest gusts occur.

There will also be a secondary risk zone in the mountains, where strong gusts of wind and heavy snowfall overlap.

In addition to this, there is a coastal flood warning for parts of Maine’s southwest coast and New Hampshire coastline.

This will mainly occur during the morning high tide, as water levels rise and coincide with a strong southeast wind.

Low roads, even some coastal businesses or homes, and other vulnerable areas will likely experience minor coastal flooding.

A few road closures are definitely on the table for Monday morning.

The timing of this threat is mostly between 9 a.m. and noon on Monday.

Last, but not least, the snow totals. I’m giving it its own section because I know a lot of people click on this article just for this card.

The highest totals will be in the interior sections of western Maine. The snow gradient across York County alone will be truly impressive…the coast receives next to nothing, while inland areas pick up nearly a foot. Maybe even more than a foot in some places!

The Lewiston-Augusta corridor has been pushed back slightly. I think the leading edge of the snow will just dump snow, which should put that area within 4″ fairly quickly (maybe even up to 8″) before the change occurs.

Bangor ends up in the 2-4″ range thanks to a quick sleet and rain. Route 6 north of Lincoln and Maine is more likely to see 4-8″, although I wouldn’t be surprised if a few towns along the Maine-Canada border (like Topsfield) end up slightly lower.

The southeastern coastal areas suffer the same fate as the southwestern regions, where it will be just too hot for more than a little snow before the rain takes over.

Power outages and coastal flooding will cause problems. Have a plan to stay warm as the cold air returns on Tuesday followed by arctic fire at the end of the week.

Try not to travel, it is possible. I think it’s a good thing the kids are home from school tomorrow given these forecasts.

Never, ever touch power lines on the ground.

That’s pretty much all I have. Be safe tomorrow. If you send photos or videos to “Near Me”, please do so securely.

Don’t look now, but we may have another major storm to discuss next Sunday or Monday.